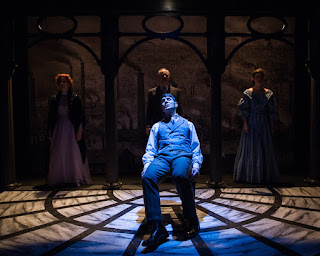 Take a break from the seasonal ritual of  A Christmas Carol  to  enjoy another Dickens’ classic.  Hard Times, at Washington Stage Guild, is truly a show for this season.
One of Dickens shortest books is nevertheless filled with dozens of characters. This adaption for the stage by Stephen Jeffreys requires no less than19!  Switching roles in split seconds, Steven Carpenter, Brit Herring, Chelsea Mayo and Sue Struve,  each take on four or five, giving life to Dickens’ wide range of humanity.
Brit Herring is Mr. Gradgrind, whose builds his life around facts. He will also play his manipulative son Tom who will rebel against all this by drinking and thieving.  Chelsea Mayo’s most important role is as his lovely daughter Louisa whose emotions are suppressed by his emphasis that facts alone are what to base one’s life on. She will be married off to Mr. Bounderby, played by Steven Carpenter, who will also play the James Harthouse who will try to persuade Louisa to run off with him.  The two roles are seemingly as opposite as they can be on the surface:  Bounderby the bragging successful owner of all the factories and the bank in Coletown, and Harthouse, with the attention deficit wandering con man equally a braggart.
Sue Struve also takes on contrasting roles. She is Sissy Jupe, who enters the Gradgrind home when her father, a circus entertainer disappears.  She will become Louisa’s best friend and in many ways, while she could not get through with Mr. Gradgrind’s school of facts and figures, she will be the one who figures out how to resolve many of the issues. She will also play the spiteful Mrs. Sparsit, who has Mr. Bounderby’s permanent house guest will do what she can to destroy Louisa.
Christmas Carol is so focused on gift giving and presented as a time for wonderful holiday meal with one’s loving  family, while Hard Times has themes of facts versus emotions, capital versus labor,  the circus life versus factories.  This is to say nothing of complex family relationships and the more grueling aspects of poverty, which are  issues as real today as when it was written in the Industrial age in Britain circa 1850.
Like Christmas Carol, which is grouped around three Ghosts (Past, Present and Future),  Hard Times has three acts: Sowing, Reaping and Garnering.  No evil goes unpunished in Dickens as the summary of what happens to each of the characters five years after the ending, ending,isis made clear in the final speeches.  While it won’t be the happy outcome of Christmas Carol, Hard Times’  biblical message that as a man sows, so shall he reap, it is as important one, presented as Dickens and Washington Stage Guild traditionally does, in a most entertaining way.
(WASHINGTON STAGE GUILD until Dec. 8, 2019)