A BRONX TALE
at National Theater
Name any of the top awards in American entertainment—Academy Award, Grammy, Oscar and Tony—and someone who was involved with creating  the story, music & lyrics and movie version for A Bronx Tale has won it.
The musical version at the National Theatre was all high energy dancing and doo wop music, making this streetwise coming of age story great fun.  Set in the Bronx in the 1960s, the message is universal —that what is important in life is what we share as a family and love.
The  opening night cast at National Theatre was super special  because —most unusual for a touring show—it features 11 alumni from the Broadway production. Joe Barbara (Sonny), Richard H. Blake (Lorenzo), Joey Barreiro (Calogero), Michelle Aravena (Rosina), Brianna-Marie Bell (Jane), Antonio Beverly (Tyrone), Frankie Leoni (Young Calogero), and Shane Pry (Young Calogero Alternate).
At The National Theatre, Washington DC
(one week only from March 26 through 31, 2019)

SPECIAL ALERT As a double treat, WSG will host Reading Hedda Gabler on Wed., April 10, at 7 pm.  with he same cast in their corresponding roles in the Ibsen classic.
Hedda Gabler is hilarious.  If you never thought of Ibsen’s heroine like that, Hedda herself in John Klein’s very hip Resolving Hedda will  explain it all to you --what is really going on in a way that Spark notes have missed all these years.
Being one of the most important characters in modern drama isnot enough if it means dying every night.  Kelly Karcher as Hedda is determined to have her life go on after the show.  The audience is rooting for her all the way as she leads a cast of zanies starting with her hapless husband, George ( Jamie Smithson),  who is more concerned with Eilert  (Matthew Castleman) as an academic rival rather than his role as Hedda’s erstwhile lover.
There is Thea (Emile Faith Thompson) Hedda’s innocent foil, Judge Brack (Steve Beall) who mixes it all up and Aunt Julia (Jewell Robinson) who joins in the confusion.
It’s double the fun when ridiculous characters don’t get the jokes they are.
While updating 19th century  women characters in terms of 21st century ideas on feminism seems to be popular, most revisions take a serious vein.  This is the time —and the need I might add— for a good look at it all through a comic eye.  And the surprising (spoiler alert) ending to this is the point—that Hedda is still who she really is in the end.   And maybe to add, we never really knew her before when only looked  through one of the very old and dusty lens.
Making her Stage Guild debut as set designer is Tara Lyman-Dobson. Other design elements are provided by a trio of WSD resident designers—Sigrid Johannesdottir with costumes, Frank DiSalvo with sound, and Marianne Meadows with lighting.
Resolving Hedda WASHINGTON STAGE GUILD   to  April 14 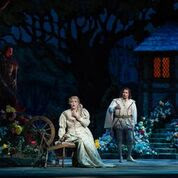 The Washington National Opera’s Faust is a triple header treat: Goethe’s literary classic set to Gounod’s lush operatic music, performed with Houston Grand Opera’s lavish sets reminiscent of masterpieces from art museums.
The red and black scrim gives the first hint that there is something of the devil to come. In the opening scene, Faust (tenor Marcelo Puente) resembles the Philosopher in Meditation in a dark portrait attributed to Rembrandt.
Mephistopheles (bass Raymond Aceto) appears with the magic portion for him to drink for youthful fun filled life and a contract to sign for his eternal damnation.   What follows are festive scenes of villagers which remind of  Bruegel’s detailed busy depictions of peasant life.  There is even included in the background a morality play of Adam and Eve and the devil in the Garden of Eden being staged at the rural festivities alongwith the big heads carried by parading revelers.
In another garden, Marguerite (soprano Erin Wall) appears at her spinning wheel, a dedicated and patient women, so like Cowper (the last of the Pre-Raphaelites) painting of Margaret at the Spinning Wheel.
Throughout there are passages hinting that Gounod writes religious music, but in the final scenes we can be sure when in a vast darkened cathedral, Marguerite seeks forgiveness. The earthly interpretations of religion that condemns her to hell is re-enforced by the power of the booming organ music.  On the altar, lies  a dead body—is it her brother killed in a duel with Faust or is it a life like Spanish Baroque polychromed statue of Christ?
She must endure the worst a human can—a life turned hell on earth— the deceptions of love and the guilt of having killed her child, madness, imprisonment and execution.  The final scene does not just have her walk on a man made constructed stairway to heaven assisted by angels, but rather through ascending clouds, floating upwards into the sun and brightness of rainbow lights, that is what is salvation.
This is the Houston Grand Opera set and costumes designed by artist Earl V. Staley and lighting designer Michael Clark. Truly an art work in itself!
Noteworthy in this performance are baritones Joshua Hopkins as Valentin and Samson McCrady as Wagner and  mezzo sopranos Allegra De Vita as Siebel and Deborah Nanstreele as Dame Marthe.
Faust at Washington National Opera, Kennedy Center, March 2019-a  memorable performance of Faust  to please both the ears and the eyes.


(Photo credit Scott Suchman)
Posted by Celia Sharpe at 5:53 AM 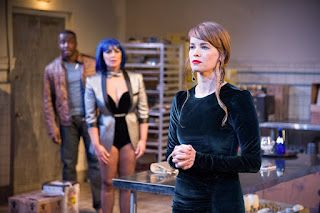 Queen of Basel at Studio Theatre is a powerful searing work that cuts to the core of the emotional underpinnings that destroy both an individual and society.
While playwright Hilary Bettis owes some structure and story points to the August Strindberg’s Miss Julie— such as the the three characters and the setting in a kitchen of a lavish establishment—this is a throughly modern piece which goes beyond class and desire of his 1888 classic  to adds race and ethnicity, skin color and immigration status to the mix.
Julie (Christy Escobar) is the smart seductive socialite daughter of real estate developer of  the luxury South Beach hotel.  She is hushed off to the small industrial kitchen after an accidental encounter of alcohol spilt on her dress.
Christine (Dalia Davi) is a struggling cocktail waitress who has recently escaped  violence in Venezuela.  She has been tasked by Julie’s father, along with promises to help her out of desperate situation,  to get Julie home.
John (Andy Lucien) is her streetwise boyfriend, a first generation Cuban-American Uber driver.  He has been summoned by Christine to take Julie home.
These are the characters on the stage.  There are other characters—the ghosts for the story—Julie’s controlling father, her dead mother, Christine’s young daughter, Jean’s imprisoned father—all who are ruthlessly pulling heart strings of these characters like marionettes.
Stripped of the glitter of the outside world, each character unloads three different profoundly human experiences we can relate to in this emotional roller coaster paced drama.
A superb production that misses none of the details either in what we see on stage or what lurks in the complexities of our hearts.
Photo credit: Andy Lucien, Dalia Davi, and Christy Escobar in Queen of Basel. Photo: C. Stanley Photography
Queen of Basel  at Studio Theatre, 1501 14th st. NW, until April 7,  2019.

Can Washington National Opera’s production of  Eugene Onegin lives up to Tchaikovsky’s great  “lyrical scenes” based on the great Russian classic Pushkin’s  novel-poem?
This fatalistic fairy tale, wrapped up in lush music, Eugene Onegin, is built on a series of powerful contrasts, not only of  its character but also reflecting two Russias, that of peasants and that of nobles.
There is the idealistic rural Tatiana sung by Anna Nechaeva, who falls in love with the bored elitist Onegin, sung by  Igor Golovatenko.  In contrast  there is  Olga (Lindsay Ammann) her flighty sister and her long time beloved Lensky (Alexey Dolgov).  Their lives will be ever changed by the heart break the condescending Onegin sets forth.
By the final act, Tatiana, a mature sophisticated woman, married to Gremin (the superb bass Eric Halfvarson).  He is an old man who has been elevated to be a prince because of his heroism on the battle field. His heart rendering song of love for Tatiana, is like her once love drenched aria about Onegin.
Onegin is a world weary broken man who despairs of life.  He  has killed his friend in a duel on another battle field of life and now sings his regrets as he sees he has lost a chance for fulfillment with the mature woman Tatiana has become.
In the opening scenes, there are choruses of dancers and singers in the rural village who gather in the family home for a traditional name day celebration for Tatiana.
In the final act,  the chorus  is transformed to the royal court where they whirl to waltzes.
WNO production’s set, poetic with its lighting and hues, presents a simple background for its superb singers to each plead their heart out in haunting arias. It is a perfect fit for fulfilling Tchaikovsky’s words for a sincere “musical reflection of ordinary, simple, universal sensations” that goes beyond the unrequited love or high tragedy of grand opera.
Washington National Opera, Kennedy Center, March 2019.