Mozart’s DON GIOVANNI Is this not a never-ending tale?

The world’s leading baritone, Simon Keenlyside not only made his Met role debut as Don Giovanni, in Mozart’s masterpiece, he had a few things to point out in the intermission about what many viewers might already had in their mind—how relevant the theme is to the modern media headlines.

For a history refresher,  Don Giovanni opened in 1787, a few weeks before Delaware was the first state ratified the American Constitution,  and on the eve of the French revolution.   It was years ahead of Darwin’s Origin of Species.

However he did not have to remind us that the news is filled with debates about what the US constitution (from Supreme Court to Presidential elections)  as well as filled with high profile stories of sexual allegations.

Keenlyside, a Cambridge graduate, could probably have talked about this for as long as the opera, but he had to go back on to Act II which shows Mozart’s solution to such flagrancy.

There is no controversy that Keenlyside’s voice is a treasure—and that  his acting ability and his athleticism add a dynamism that makes his Don Giovanni all too real.

The superb cast included Hibla Gerzmava as Donna Anna and Malin Byström as Donna Elvira,  with Adam Plachetka as Leporello and Matthew Rose as Masetto,  Interesting to note that these roles are often traded, that is sopranos who sing Donna Anna might in another production sing Donna Elvira, and ditto with Leporello and Masetto. Paul Appleby was both strong and tender as Don Ottavio, Serena Malfi  utterly delightful as the wise peasant girl Zerlina.  Kwangchul Youn as the Commendatore was formidably scary

Met simulcast views also got a taste of what the next opera, Saariaho's L’Amour de Loin which will be presented live in select cinemas nationwide on Saturday, December 10 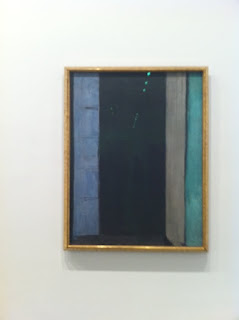 That is not the only surprise at  the Baltimore Museum of Arts’ Matisse/ Diebenkorn (Jan. 29, 2017), where the works of the two artists are interspersed throughout.

The first Matisse that Diebenkorn saw  was at a luncheon at the home of the Steins in California.  Matisse’s portrait Sarah Stein (1916), is the starting point for this exhibition.

It was love at first sight, but the true connection developed later when Diebenkorn was stationed at Quantico and visited the Phillips Gallery, the National Gallery of Art and the Baltimore Museum of Art.

The exhibit contains  36 paintings and drawings by Matisse and 56 by Diebenkorn, The journey follows the chronology of Diebenkorn’s career from representational paintings to abstract and then back to conceptual art.  It ends with his most celebrated Ocean Park series.

The works are arranged  so one can  draw one’s own conclusions about their relationships. One suggested way is to select a favorite piece in each gallery and work around it to see the interplay of ideas.

My own favorite work is Matisse’s View of Notre Dame (1914), at the midpoint of the show.  One can analyze it for color and form, but this work is so much more then a dissection of its parts. 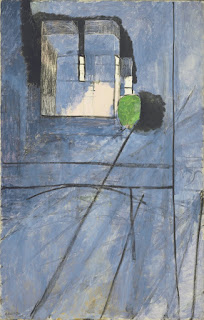 While they never met in real life, Diebenkorn’s admiration of  Matisse spanned his career.  The exhibit includes works  that Diebenkorn saw at Matisse exhibits in his lifetime and  which continued to inform his work.

It is worth noting that Diebenkorn  did not simply borrow techniques from Matisse, but rather than he let Matisse’s thoughts take root.  On  display throughout the galleries, are cases featuring over 40 volumes that he owned and studied about Matisse.

Matisse of course influenced many artists and Diebenkorn was influenced by others than Matisse.  An interesting conversational point was that that Matisse at the end of the exhibit might not have been a finished work. When one looks at the influence he had on subsequent modern artists, not only Diebenkorn, it is clear that his true artistic vision which inspired them, is part of his great unfinished legacy.

Tristan und Isolde,  probably had more viewers then ever in a single performance on Met Simulcast on Oct 8 than in composer Richard Wagner’s life time. I have no concrete numbers to support that statement—but it is a likely possibility  as this is the way opera is viewed by the most people today.

Wagner took a medieval legend, turned it into a story for 19th century sensibilities.  The Met has gone further with a production with modern technological touches.

I thought as I listened, how modern is this music, and perhaps it was because I was seeing the scenes now set in a three level ship and then  in a warehouse and finally in  a hospital room. Perhaps it was because Wagner’s music has had such influence on what was written  after him.  But there was no doubt in my mind, that if Wagner had indeed just composed this giant work, he would steamroll any modern composer writing today.

And then I had a reverse thought— What might Wagner think of this production, he who was so precise about every word — to now see that the translations were flashed on the screen in English.   Would he be pleased with this outstanding Wagnerian opera stars of today, Nina Stemme as Isolde, Stuart Skelton as Tristan, Ekaterina Gubanova as Brangäne, René Pape as King Marke, and Sir Simon Rattle conducting

Peter Gelb, General Manager of the Met, said this was the 11th year of Simulcast, the 100th opera performed, and the opening production of the 50th anniversary of the Met at Lincoln Center.  The choice of Tristan und Isolde was to have something big, with the greatest stars today, and then broadcast it live from the giant stage to the giant screen.

This is as big as it gets.  Mega genius that he was,  bets are that Wagner would have loved it!


TICKETS ON LINE - http://www.fathomevents.com/event/
Posted by Celia Sharpe at 5:12 AM