GO GET  YOUR TICKETS NOW FOR
JOURNEY TO THE WEST 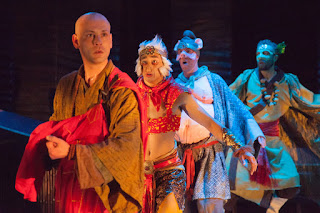 You don’t need to go to a travel agent and book THE TRIP OF YOUR LIFETIME—Let Constellation Theatre Company take you places you cannot imagine!

In  Journey to the West,  the artistry of director Allison Arkell Stockman  and playwright Mary Zimmerman converge for a multi-layered experience.

A  Buddhist monk (according to ancient Chinese legend) is in search of sacred scriptures in India.  Along the way, he meets a rambunctious monkey (the mind which flips and turns), an insatiable pig (the body and base appetites), and a fiery river monster (heart and muscle).

What started as the re-telling of a historic pilgrimage of a 7th century monk, and became the legend that was recorded as one of China’s four classical novels in the 16th century, has in turn spawned hundreds of films, operas and books on into the 21st century.

Over the centuries,  the miles and years of this journey expanded until the trip became 108,000 miles to go over 1,000 mountains and cross 1,000 rivers!

Clever, colorful and comical, this cartoon like adventure story is one that entertains even as it edifies.  Rather than exploit the differences between several systems of ancient Eastern philosophies —let alone the dichotomy with modern Western beliefs—this faith fable is a universal experience.

Add music by Tom Teaseley, the first class  ensemble, the fantasy costumes  and the risky balancing acts— The Journey into the West is one trip to totally enjoy as we move along on our own  life’s journey.

Until May 22 at CONSTELLATION THEATRE COMPANY  at 1835 14th ST NW, WASHINGTON DC
Check out
www.ConstellationTheatre.org for information and for more events in conjunction with this show.

OPERA PLOTS: HISTORICAL OR HYSTERICAL
…or BOTH?
Robert Devereux and Electra

While Robert Devereux takes liberties with historical facts, the opera is based on a real person, the English nobleman who was a favorite of Elizabeth I and an ancestor of Queen Elizabeth II.

The opera so named after Devereux, based on his downfall and death, is really about  Elizabeth I, sung by no less than soprano Sondra Radvanovsky, who has sung all three Donizetti Tudor Queen operas in the same season  (Mary Stuart,  Anne Boleyn and now Elizabeth I).

Electra is a mythological Greek character, the daughter of King Agamemnon and Queen Clytemnestra, and thus princess of Argos.  Nina Stemme is Electra — last seen in Turandot, this October to be Isolde.  (an equally formidable trio of roles to compare to the Tudor Queens!)

Besides their royalty, both women  have the opportunity on stage to enact their rages. Elizabeth  cringes and pounds the floor at the news of the Lord of Essex’s death.  Electra  dances away in a frantic mania to her end in her grief over the death of her brother.

Ah yes! Life is so unfair in opera!

Both Elizabeth and Electra  have had many plays, movies, operas written in attempts to figure  them out:  Electra with Greek playwrights from Sophocles, Euripedes and  Aeschylus to the American Eugene O’Neill while  Elizabeth had plays by no less then Shakespeare written in her honor.

Elizabeth has lands named after her (Viriginia comes to mind first, for her, the Virgin Queen). Electra has a psychological complex in her name.

Historians report that Elizabeth  really only  paused for a moment  at the word that Lord Essex had been executed, and then continued playing the virginal. Thankfully historians don’t write  operas or we would never have had that wonderful final scene of glorious bel canto singing.

Historical or hysterical— and as different as these two themes might sound—in the last two operas of the Met Simulcast season, both ring true.

At least to my ears!

See you next season.
Details already available at

THE MET SIMULCAST
WHAT I DID FOR LOVE  -
MANON, MIMI AND MADAMA B

Madama Butterfly was a most appropriate opera scheduled for the start of  Cherry Blossom Festival Week in Washington DC.   Even though many in the audience have been suffering from allergies, there was delight at seeing the cherry blossoms drifting like snow— but on the screen so assuredly not real blossoms.

Soprano Kristine Opolais continues to amaze as one of Puccini’s women who is obsessed by passionate love, exuding a sensuous aroma in her portrayals of Manon, Mimi, and Madama B.

Only a few weeks before on Met Simulcast,  she sang Manon Lascaut   In April 2014, she made Met Opera history  singing Mimi  in  Boheme when the lead was sick, with short notice, after having sung Butterfly the night  before.   (Yes, two Puccini women in 19 hours!)

And this is what invites the comparison, that Opolais presents each of the roles as unique personalities, but all swimming in that pool of human passion and pain, where Puccini places his women.

(Aside:  Puccini wrote these three operas  in that order with Tosca between  Boheme and Butterfly.   Both Tosca and Turandot are women who are in a class by themselves, with each of them, the diva and the princess having financial resources not available to this beloved trio.)

What is interesting is that when the money gets meager, Manon  finds some one who can support her in an upscale lifestyle.  Mimi too, with TB and no health insurance, knows she needs to split from the dream that love alone is going to keep her warm.

The deserted Cio-Cio-san (who insists on being called Mademe Pinkerton)  like all dramatic characters, is also given a chance  to get out of her desperate situation.   She has a child to think of too.  Her choice as she counts change with Suzuki in the three years that Pinkerton has left her,  is that she  can marry her rich Japanese Princ Yamadori and go live in one of his palaces rather than continue in her present precarious arrangement where rent is paid by the local USA consul Sharpless is about to come to an end.

This seems like an opportunity both Manon and Mimi would jump at. (neither had the chance
to marry up into royalty).

Does Butterfly do it?

No way.   She rejects not only the prince but everything he stands for.  She sticks by her belief that her love makes what she believes reality.

None of these three get to live, even though all will be reunited with their great love for a few moments before THEIR END.  Butterfly is the only one who has control of her death—even as she has no choice—but to die with honor, rather than to continue to live as what is the economic basis that three women share.
Call them courtesan, escort or geisha.   Dramatically different then the divine diva Tosca with her stage career!  Or  Ice Queen Turandot, with her own fabulous  kingdom who is the one who kills off desperate suitors!

Whatever you call it, their loves are surely undying, as it continues to remind us at the opera!

THE GOSPEL ACCORDING TO THOMAS JEFFERSON, CHARLES DICKENS, AND COUNT LEO TOLSTOY:  DISCORD

These three eminents find themselves after death in a locked room (a No Exit situation, seemingly eternal but not specifically either heaven or hell)  with the task to figure out why they are put together before that door will open.

What is given is that each has written his own gospel, extracting from the original four evangelists what fits his construct of ideas simmered by his personal quirks.

The rational Jefferson  (Brit Herring), the sentimental  Dickens  (Peter Boyer), and the passionate Tolstoy ( Steven Carpenter) set about this task.

How will these three ever agree provides the format for a romp through the history of ideas.  Fact checkers will be satisfied to know that many of the spoken lines in the quirky script are documented in these great men’s writings.  Both believers and non-believers will  be delighted
at the cleverness .   Everyone will enjoy the comic ride.

The three great men are not unlike the rest of men, their private lives quite contradicting their
public persona.  To play a bit with symbols, they must look in the murky mirror of who they really are before that stuck door will open to free them.

And when it does, in a flash the differences disappear and we all know at once why we are here—that is on earth and at this wonderful theater.


For information and reservations, please call 240 582-0050 or email info@stageguild.org or go to www.stageguild.org
Posted by Celia Sharpe at 9:44 AM