Washington Stage Guild’s production of Gulf View Drive, with its characters close up and as intimate as our own families, is done with both honesty and grace —this is live theater at its best.
Larger than their individual concerns in Gulf View Drive at Washington Stage Guild are the deluge of changes coming in the decade the characters inhabit in the 1950s.
While in the background are the corny culture symbols of the 50s (Queen for a Day quiz show on television with four women with a sob story:), what looms in the decade ahead are confrontations:  McCarthyism, blatant racism and sexism as well as the post trauma of returning World War II veterans.
Their immediate tasks are the personal worries set in scenes starting right after Thanksgiving and going through Christmas and Easter to Mother’s Day—all the touchstone dates of family gathering which stir up conflicts.
WSG cast works seamlessly together even as the characters are  stubbornly at odds.
Wood Van Meter is Raleigh, a successful writer of serial novels  and Lexi Langs is May, his wife and a school teacher.  Far from their life in Kentucky or the war in Europe, they have now paid all cash for their new home in Florida with a view of the water (and the dreams of what can be seen beyond it).
Lynn Steinmetz is Mrs. Gill, May’s widowed mother who has been living with them for a year now and totally cheerful about her new life.  Laura Giannarelli is Mrs. Brummett, Raleigh’s recently widowed mother who arrives with her cranky comments about everything.  Chelsea Mayo is Raleigh’s sister Treva—the unexpected arrival—who is  always tired and out of cigarettes.
At first the issues seem simple.  Musical beds for where each one will sleep? Whose turn is it for kitchen duty for supper?
Then the secrets that make each one seem so self absorbed and selfish unfold until Raleigh’s and May’s relationship, so lovingly romantic at the beginning, seems to come apart.
Mrs. Brummett has no home to go back to because the owner of the farm where she has been a sharecropper all her married life has sold it.  She can’t read so while she can drive a tractor, she can’t get a driver’s license. Treva has left her husband in Detroit and kids in Kentucky and with good reason. Raleigh and Mrs. Gill have secret fun outings in the afternoon, unbeknownst to May who has a long held pain she has yet to share.
Until the end resolve, I held my breath…this has got to work out for everyone. After all this is modern theater about ordinary people and not a Shakespearean tragedy to end with dead bodies of royalty lining the stage.
This is the third of Arlene Hutton’s plays to feature the same cast of characters.  That said, the play stands on its own even though it invites to re-view Last Train to Nibroc and Sea Rock City.
What I await is the next installment. Just as Raleigh writes serial novels, and Treva watches endless tv soap operas, I can hope that the playwright will find a way to tell us what happens next in their lives… and that this excellent cast so assembled as a family on stage will bring it live to us at Washington Stage Guild.
WASHINGTON STAGE GUILD (UNTIL FEB. 10, 2019)
Posted by Celia Sharpe at 5:11 AM

THE INSERIES BRINGS IT FROM U STREET TO THE COTTON CLUB 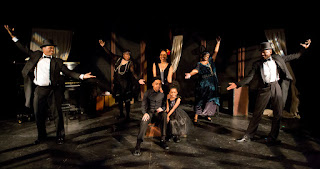 It may be  230 some miles from U Street to the Cotton Club in Harlem  but it will seem like you are right there at the In Series From U Street to the Cotton Club, now playing at The Source Theatre in Washington DC.
DC’s musical contribution to the sound and soul of the Harlem Renaissance unfolds through poetry and music in  this extraordinary production. And it doesn’t just tell the history, it gives the audience  a chance to experience where it all started. There’s a special tour before the play of just where some of the clubs mentioned in the musical were on the U Street corridor.
The exceptionally talented cast stars Michelle Rogers in duel roles as Little Lena.  Kasi Rogers and Mecca Rogers play her two children who find this musical legacy of their Grandma Lena in a trunk in the attic.
Sybil R. Williams script of a play with music with the inclusion of poetic texts,
weaves an operatic work of the journey of African American music from slave ships to churches to night clubs.
Memorable moments from the performance are soprano Detra Battle Washington’s sophisticated rendering of  the Duke Ellington classic “Sophisticated Lady.  Mezzo Pam Ward is sassy as she sings “Fats” Waller’s  “Ain’t Misbehavin.” Tenor Brian Quenton Thorne with the Cab Calloway special “Minnie the Mooocher” and baritone Greg Watkins in “This Joint is Jumping” turn back the clock to bring to life on stage the fun of the times. There were a few teary eyes as  the depression brings the show to a halt, with its sad 1930 number, “Brother Can you Spare a Dime?
Kudos to the fine live musicians:  Stanley Thurston on piano, Percy White on bass, and Richard Slye on percussions, and to director KenYotta Rogers and choreographer Angelisa Gillyard.
Inseries continues with its innovative program and its contribution to the community  to show the r(E)volution! -ary power of song.  Coming next will be La Paloma at the Wall at GALA Hispanic Theatre on March 23-31, 2019.

(PHOTO OF CAST BY ANGELESA GILLYARD)