BLOOMSDAY
The Washington premiere of Bloomsday  at Washington Stage Guild is a treasury of wit and wisdom.
A man returns to Dublin after 35 years to revisit his youthful missed connection with a woman who was his tour guide through the path James Joyce’s Leopold Bloom’s wanders in Ulysses.   Moving between the past and present,  they retrace their steps in their memories.
Playwright Steven Dietz  has said that “we carry all ages inside us…our past looks out from the same eyes as our present.” So true is this and so well handled by the four actors, who flow believably  between the present and past as their old selves encounter their younger selves.  Steven Carpenter is Robert, the older man, who advises his disbelieving younger self, Robbie, played by  Josh Adams.  Megan  Anderson is Cait, her older self, who tells about her life to her younger self. Caithleen, played by Danielle Scott.

At  the end, Robert and Cait  meet as they have arranged on Bloomsday.  Is it romantic or realistic?  Or is it both.
The show is just in time for Valentine’s Day for anyone who has a memory of lost love.

The Merry Wives at Windsor

It takes a village to bring down a man as big as Falstaff and the  The Merry Wives at Windsor, Mistress Page and Mistress Ford are just the two to lead them.
Described as one of Shakespeare’s lesser plays, it’s centerpiece figure Falstaff  has become one of his greatest characters.  a fact that is emphasized by his girth matching his giant ego.  Brian Mani totally fills the role to lead actors and audience in the  raucous show re-worked with  70s music, costumes and jokes!
Most convincing is that we the audience are in on the plot. While actors move through the audience is nothing new, all that was missing in this one was asking for volunteers to come up on stage and join in with Mistress Page (Linda Bard)  and Mistress Ford  (Ami Brabson)  on their sofa to help concoct a plan to teach Falstaff a lesson.
There is fun with puns.  There are even puns within puns with the meshing of 1970s sitcoms with the bard’s bawdiness.
If actions speak louder than words, not only does Mistress Quickly (Kate Eastwood Norris)  play with her name, but before it is all over, she takes an unexpected tumble.  Very quickly!
It will take three attempts to strike Falstaff out but this rowdy bunch of characters will do it!
Kudos to the costume designer (Devon Painter).   One audience member nudge another saying for everyone to hear  “ You used to have those pants. “
There are no loose ends in this production!  Everything  is neatly sewn up in the end, as Shakespeare would have it.

Sheltered now on stage atTheater J, seems so real.  That is because it is. Inspired by the true story of an American Jewish couple who rescued  Austrian Jewish children in 1939 and placed them with American families,  the playwright Alix Sobler explores possible emotions and conflicts that might have gone on  behind the scenes of their daring humanitarian effort
Act 1. Leonard Kirsch (David Schlumpf) and  his wife Evelyn (Erin Weaver) invite  the Blooms, Martin (Alexander Strain) and Roberta (Kimberly Gilbert) to dinner at their lovely home in Providence, RI.  They have not seen each other in a long time, but the Kirsches need a 40th family to agree to sponsor a child.
What is revealed over the evening  are strong emotions  — not only of vastly differing viewpoints on involvement of the events in Europe, but also of the violence within their domestic life.
The living room has now been reconfigured for Act 2 as a hotel room in Vienna.   The Kirsches  are conflicted over choices of which children out of so many they have interviewed who would or should be selected.  They are interrupted by an Austrian woman, Hani Mueller (McLean Fletcher)  who has  come to ask that her son be taken off the list.
Evelyn is the one who alone with Roberta had opened the flood of violent emotions in the Blooms marriage. Now, she asks to be alone with Hani Mueller to reveal her fears at sending her child away.
What Evelyn knows, and we too, is that this child is to be placed with the Blooms.    What the Kirsches suspect and what we know, is that, is what the next 6 years will bring to Austria. And what no one can know, is how it will be for any of them.
Erin Weaver’s role of Evelyn is pivotal in this intense and wrenching drama,  as she reaches the deepest pains and fears of both women in this memorable drama.
The  stage is one that could well have been for a nostalgic play, evoking an underlying sense of regret and woe for all that is unfolding on the world stage.

JERSEY BOYS
JERSEY BOYS is music history!
Not only is it the story about Frankie Valli and The Four Seasons, those four boys from New Jersey who became rock and roll icons, but this musical set records as one of the longest running Broadway shows with its 11 year run from 2005 to 2017. 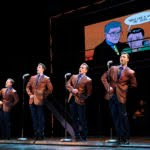 Bringing this legend to life at the National Theater are Jon Hacker who leads as Frankie Valli with Eric Chambliss as Bob Gaudio (who also wrote the musical), Corey Greenan as Tommy DeVito  and Michael Milton as Nick Massi.

At the performance I saw at the National Theater, most of the audience was probably not born when Valli made his first recordings in the 1950s. This did not stop anyone from swaying, cheering and clapping at some of the greatest sounds of American popular music ever.
One great moment in the show is when the group make the charts with selling 3 million records.  Today a YouTube of one of their songs has multi millions of viewers.
Valli himself is continuing to perform all over the country but what is here, right now at the National Theatre, is the musical that tells the ups and downs of how it all came to be.
What is the best thing the best thing to say about this show and the wonderful cast touring with it now, is that days after, you can still hear the music.
Kidos to the wonderful  ensemble playing multiple roles: Andrés Acosta, Justin Albinder, Ashley Bruce, Kenneth Quinney Francoeur, Katie Goffman, Connor Lyon, Kevin Patrick Martin, Sean McGee, Hamilton Moore, Bruno Vida, and Amy Weaver.
National Theatre, Washington DC, December 2019
PHOTO CREDIT Walk Like a Man  (l to r) Jon Hacker, Eric Chambliss, Corey Greenan and Michael Milton Photo: Joan Marcus
Posted by Celia Sharpe at 10:31 AM

The best reviews of Peter Pan and Wendy at the Shakespeare Theatre Company are not in the media but in the minds of the children.  Their squeals of delight and amazement are clear that this is one fantastic show.    I doubt that any of the under five year old set seated around me understood the meaning of the words or the social issues this updated version of a complicated classic  re-presents. But they will remember the magic of live theater.
This up-dated Peter Pan, is a show as much for adults as for kids and not because it is a nostalgic (or not) reworking of a second childhood experience when we first encountered Peter, Wendy, the Lost Boys of Never Never Land, Captain Hook, Tiger Lily and Tinkerbell, and the beloved Nana.
For this Peter Pan is not a re-setting of the story in a modern scenery with clothes to match (and in this one some wear clothes are appropriate  J. M.  Barrie’s time period) but rather that as the characters are addressing modern ideas, they share human experiences and emotions that are not limited to any one age group or century.
Lauren Gunderson is the brilliant adapter of the oft retold Peter Pan story and Alan Paul, the director of this sparkling production. Justin Mark is Peter Pan, Isabella Star LaBlanc is Tiger Lily, and Sinclair Daniel  is Wendy Darling.  Jenni Barber is both Mrs. Darling and Tinkerbell and Derek Smith, Mr. Darling and Captain Hook.  All the boys are great but there are a few behind the stage designers whose work is indispensable for the fun  Puppet designer James Ortiz for his great crocodile that swallowed the clock, flying choreographer Paul Rubin and fight choreographer David Leong and for Special Effects Jeremy Chernick.  And of course, William Berlonni, Animal Trainer for Nana and the Whole Shadow Animation team who brought us Peter Pan’s Shadow.
At the Shakespeare Theatre Company until Jan. 12, 2020.

THE WOMAN IN BLACK

The Woman in Black is really scary.
Luring you into the tale is Arthur Kipps who experienced an unspeakable horror and an actor who will help him present the story on stage.  They seem like such nice men too and the first act seems to mull around how they are going to handle the emotions of fear through the techniques of acting and the mechanics of  theater.
Such details can be distracting to the story.  Restlessness feeds impatiences to get on with it.  So does the belief that this will be really scary.  After all they have shown us the tricks that produce the theatrics of sound and light to enhance their performance.
We have all read horror tales from Edgar Allan Poe to Stephen King.  We are used to ghosts and devils, vampires and aliens.  All of this knowledge sets us up to dare the play to scare us.
And then it does.  At the most unexpected moment.  It felt like I was in an electric chair as all the molecules in my body shook.  It was several minutes before I could settle in to my self again.  All the while the actor  and Arthur Kipps  continued undisturbed rehearsing the play.
Book, movie, long running play on the East End, this “sad tale’s best for winter” at the Lansburgh was REALLY SCARY!
At the Shakespeare Theatre Company, December 2019.