LIFE IS A DREAM at
GALA Hispanic Theatre 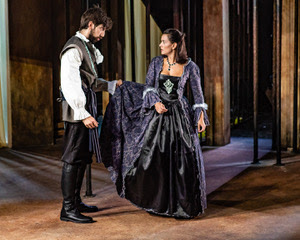 A gem of the Spanish Golden Age,  Pedro Calderón de la Barca’s  Life is a Dream is a gift for all the ages.  Now at GALA Hispanic Theatre, this world premiere adaptation by Nando López and  directed by Hugo Medrano is a rare  theatrical treasure opening  the 2019-20 season.

The story of Segismundo, a prince heir imprisoned by his father King Basilio to prevent the fulfillment of a prophecy might start out like one a familar fairy tale.  What ensues in this thought provoking play, is the stuff that great playwrights and poets and philosophers have grappled with on the power of tryranny, fate and free will in human existence.
Daniel Alonso de Santos as Segismundo  confronts the dilemma of his experiences as whether they be dreams or reality or some experience that is a mix of both.
Timothy Andrés Pabon is King Basilio who struggles as a father who fears his son will overtake his throne.
Soraya Padrao as Rosario presents duality.  Disguised as a man, she bears a sword. As a woman who has been wronged, she seeks a powerful ruler to restore her honor.
Also appearing in Life is a Dream are GALA company members
Delbis Cardona (Clarin),  Peter Pereyra (Astolfo),  Catherine Nunez (Estrella),  Camilo Linares (Soldado), and  Timothy Leo Delgado (Soldado).

Love Sick  is not unlike a folktale,  re-told in poetic language from the Bible, with singing and dancing most operatic.
Tirzah is an amazing character who tells her story to a group of street characters of how she craved love, found it, and gave all to never let it go.  Not only does Ofra Daniel create Tirzah in this stage role, but she first created her as a writer and composer.   Her acting is intense, her dancing mesmerizing.  The character she brings to the stage, unforgettable.
Sasha Olinick is   Tirzah’s husband, a fish monger, sung with poignancy.  Fulfilling many role are four women: Sarah Corey, Sarah Laughland, Kara-Tameika Watkins and Kanysha Williams.
Ali Paris is The Lover, Music Director and plays the Qanun (a rare Middle-Eastern 76-string zitther dating from the 14th century).  His fellow musicians  include:  on violin Jason Lobrador, John Tayler Garner, on Guitar Critian Perez,  Duff Davis, on bass Benjamin Rikhoff, and woodwinds Mila Weiss.  All together they give a rousing  musical concert that is a fusion of Middle Easter and Western styles.


A profound story in a unique production perfectly executed,   Love Sick is one show not to miss. (to Sept. 29) 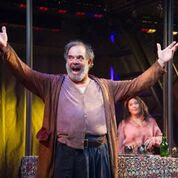 1 HENRY IV at the FOLGER THEATRE
The latest Falstaff now at the Folger Theatre is the greatest ever seen —  or so said many in the audience of 1 Henry IV.
Ed Gero overwhelms as Sir John Falstaff, in a show that is filled with great actors playing great men.
Prince Hal is a fun guy.  Avery Whitted in his DC theater debut looks every bit that he is having a joy of a ride hanging out with Falstaff as his mentor of a good time!
Tyler Fauntleroy as Hotspur is Prince Hal’s match.  As Prince Hal steps up to his role of duties to his father and the kingdom so will it be that Hotspur  fall on the battlefield, the demise of his ambitions.
Peter Crook as Henry IV is serious and worried.  Perhaps a bit of a stickler bore for a father, he is a true counter to Falstaff, both in their status in life and their approach to it, but both sharing a love of Prince Hal.
The outstanding cast are  all leading stars in their own right: Mabound Ebrahimzadeh as Blunt and Mortimer, Naoimi Jacobson as the Percy family leader Worcester,  Kate Eastwood Norris as the bawdy Mistresss Quickly and Vernon.
Jordan Lee is the Lady Mortimer who speaks no English and her husband no Welsh but who sings a lovely song. Maribel Martinez is Lady Percy who does speak to no avail to keep her husband from going to war.
Todd Scofield as Westmoreland and Bardolph, Jazmine Stewart as Poins, U. Jonathan Toppo as Northumberland and Glendower, Alex Mitchell as Prince John and Gadshill, and Sam Midwood as Peto and Douglas  all join in multiple roles and  rousing battle scenes.
There was something about the show, as it wiped away the centuries since it was first staged.  With minimal props—dramatic and efficiently employed but not so elaborate to detract attention—the show was all about the people in it,  their complexities not overshadowed by their costumes.
1 Henry IV —alive and well and not to be missed—
at  Folger Theatre  until Oct. 13, 2019
www.folger.edu/theatre