The familiar story of playwright J.M. Barrie and his Peter Pan finds its unique magic in the music of Finding Neverland.  In Barrie’s classic, within one fantastic story lies the secrets of the heart of the author.  The cast of Finding Neverland brings that story to stage both wondrously and believably so.
Jeff Sullivan is an exuberantly creative J.M. Barrie to Ruby Gibbs’  lovely Sylvia Llewelyn Davies, the widow with her four sons who inspired  playwright  J.M. Barrie to write Peter Pan.  Conor McGriffin is in the double role of the director of  the Duke of York Theater, Charles Frohman and as the infamous fictional but very real Captain James Hook.  In both roles, he keeps after Barrie to finish the play. Emmanuelle Zeesman is Mrs. DuMaurier,  Sylvia’s mother, and the concerned grandmother of the boys—Jack, Michael, George and Peter—who are played on alternate performances by Brody Bett, Seth Erdley, Caleb Reese Paul,Paul Schoeller, Josiah Smother and Ethan Stokes.
Peter Pan has inspired not only many shows and movies, but a syndrome, and  even peanut butter and a bus line.  There is soon to be a new production coming to the Shakespeare Theatre this year for Christmas.  But first now at The NATIONAL THEATRE, WASHINGTON, DC to MARCH 3, 2019.
Posted by Celia Sharpe at 12:25 PM

THE MASTER AND MARGARITA
at CONSTELLATION THEATRE COMPANY
The Master and Margarita is brimming over with an abundance of fun and profundity that merges into a grand operatic experience.  Set in 20th century Moscow, it includes the biblical story of Pontius Pilate with the Faustian tale, told with Kantian inquiry plus a good measure of anti-Stalin satire, with music and wild dancing throughout.
The Master  (Alexander Strain) is a writer, a lover, a philosopher —Margarita (Armanda Forstrom) his mistress and muse.
He has written a play about a crucial moment in religious history: Pontius Pilot (Jesse Terrill). This does not sit well with the head of Moscow’s theater Berlioz (Emily Whitworth) and her sidekick Ivan, a critic (Omar D. Cruz). She is planning to leave her husband, an astronomer no less, for them to run away together when The Master disappears.
Now whether you believe in the devil or not, does not determine whether he exists as he now appears as Professor Woland (Scott Ward Abernathy), accompanied by Fagott (Dallas Tolention),  Behemoth (Louis E. Davis),  and Azazello (Anna Lynch).
Also it does not matter if you believe that black cats are from the devil or can stand on two legs as tall as a human because this black cat, despite the rather bizarre outfit, is instantly believable as part of the devil’s trio.
Though The Master and Margarita live in turbulent times, their love is eternal,  surviving incredible events from his stay in a hellish insane asylum to hers at a party in a Moscow apartment with guests from hell.
Overheard leaving the show:  “I am going to get the book now and read it” —What a wonderful compliment to Constellation’s production of  Mikhail Bulgakov’s classic novel, adapted for the stage by Edward Kemp.
For while there have been dozens of adaptions of The Master and Margarita in many formats, there is something about a live performance at Constellation.  Here the curtain never goes down  (their stage is in open space )—  for here  there is no curtain between the ideas they present on stage and real life.
The Master and Margarita at Constellation Theatre, Washington DC, until March

THE OLD MAN, THE YOUTH AND THE SEA
GALA HISPANIC THEATER 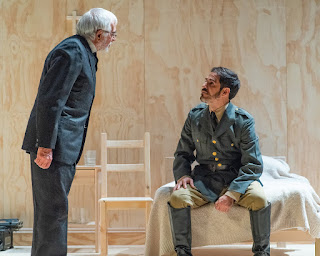 The world premier of  Irma Correa’s  El Viejo, el Joven y el Mar is an  occasion to celebrate the enduring truth and beauty of reason and empathy.
El viejo is Miguel de Unamuno, an early 20th century Spanish existential philosopher and writer whose opposition to the regime  of General Rivera let to his imprisonment in 1924 on Fuerteventura in the Canary Islands where he would remain for 6 years.
El joven is Cisco, a young fisherman assigned to guard him.
As Unamuno plots his escape from the sandy prison,  Cisco dreams of one day leaving to be on a whaling ship.
El mar holds the answer for both.
Unamuno and Cisco develop a delicate balance in their relationship, which lead to choices which will have life changing consequences for both.
The cast is outstanding with Horacio Peña as Unamuno and Victor De La Fuente as Cisco.  In dual roles are Delbis Cardona as Dumay,a journalist helping him with plans to escape and also as the General who imprisons him,  and  Luz Nicolas as his wife Concha and also as Delfina, a woman in love with his ideas who comes to offer her plan for his escape.
José Luis Arellano directs this meditative play  with its ideas  as powerful as the sea which holds the way for both freedom and dreams.  The Old Man, TheYouth and the Sea at GALA is a gift for our time. 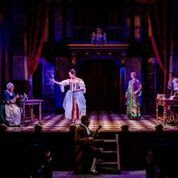 Nell Gwynn, Jessica Swale’s bright comedy about the Restoration stage,  may not be exact to every historical fact (which is based on questionable records anyway)—- but it is most true about the comic spirit of theater that survives. Nell kept her audiences laughing then and this show that resurrects her for an evening kept this audience quite happy.
A lusty king and his lovely mistress take the stage at Folger in celebration of the spirit of live theater.
Alison Luff is the delightful Nell Gywnn to R. J. Foster’s charming royal Charles II of England.
He would have dozens of mistresses. Regina Aqino plays two: Lady Castelmaine and Louise de Keroualle.
She would say he was the third Charles in her life.  Quinn Franzen plays the other significant Charles—Charles Hart  who would bring Nell to the stage that Charles II had opened up for professional actresses in the Restoration.
Alas, for Edward Kynaston, played by Christopher Dinolfo, this would be the end when a royal warrant was issued for female roles to be played by actresses.
The play deftly darts from the stage to behind the scenes where John Dryden (Michael Glenn) as he  trys to write plays, Thomas Kiligrew (Nigel Gore) as the theater manager who  strives to keep the company going and Nancy as Nell’s personal dresser  (Catherine Flye).
Then  quickly it switches to the royal palace, for more drama among the other royal mistresses and the courtier.
Alex Michell as Ned Spigget,  Caitlin Cisco as Rose Gwynn, Kevin Collins as musician, and Jeff Keogh as Lord Arlington, and Zoe Speas as Queen Catherine round out the terrific cast.
There is a movie in the works but for now what the Folger presents in real life  is about a  moment in theater history, (not just about the Restoration theater which has had its day),  and  shows what fun it still is in experiencing a show live.
NELL GWYNN at FOLGER THEATRE until March 10, 2019.