THE WAY OF THE WORLD

You can take the characters out of their place in Restoration high society, but you can’t get rid of the sex, lies and luxury that goes along with them.

That is what Theresa Rebeck has done with William Congreve’s great Restoration comedy, which she has freely adapted and directed, and is now playing at the Folger Theatre.

The staging is stunning, set in the boutique beach setting of the Hamptons in summer—an envious spot to be in but particularly now in the midst of Washington’s blustery windy winter. 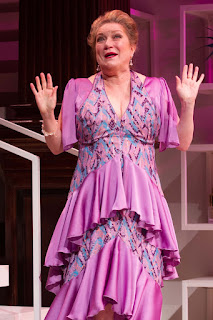 Kristine Nielsen is simply smashing as Aunt Rene, who knows the numbers—whether it is the $600 million dollars of her niece Mae has inherited (played by a believable altruistic Eliza Huberth) or the convincingly inconstant wanna be husband Henry  (Luigi Sottile).

The klatch of their friends who tell it as it is—that is gossip and scandal of course—include Brandon Espinoza as Charles , Elan Zafir as Reg, Erica Dorfler as Katrina, and Daniel Morgan Shelley as Lyle.  Ashley Austin Morris is the  summer time waitress who tells the audience everything else.

The original play is  300 years old, and an object d’arte  that winds through the plot  is a treasured heirloom that had been stolen and recovered.  The Way of the World might be a show of the extreme of wretched excess of consuming goods,  but it also shows that one treasure can be re-discovered.  And while  love does not win over all,  true lovers learn to get a long with it all as that is the way of the world.

And yes, we all want to go shopping with them!

The Way of the World  is part of The Women’s Voices Theatre Festival.
Now on stage at Folger Theatre from January 9 through February 11, 2018.
Folger Theatre Box Office at (202) 544-7077 / online at www.folger.edu/theatre.